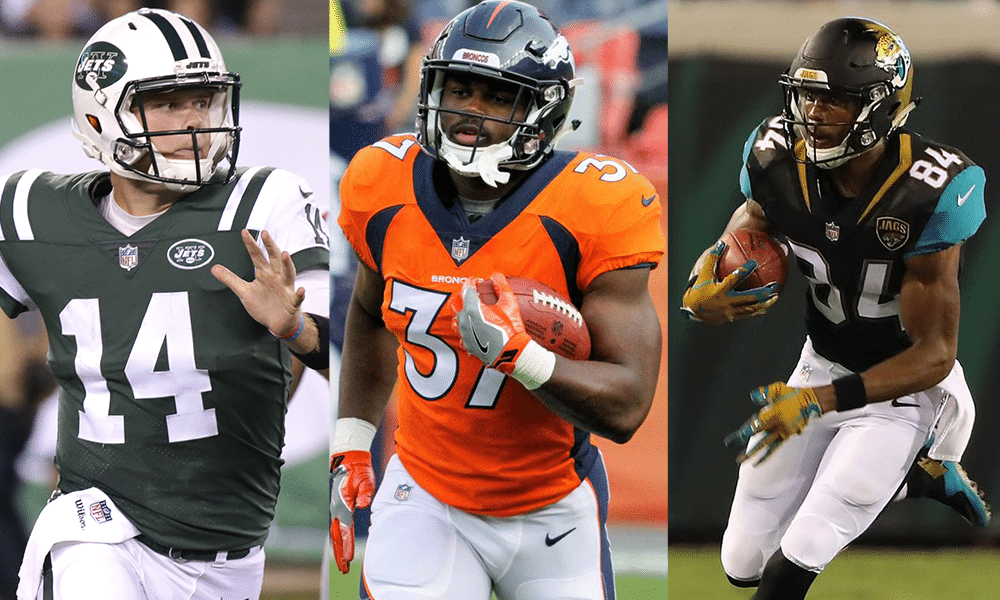 * All ADP are based on .5 PPR scoring settings

Wentz is currently being drafted in rounds 6-7 of drafts.

Rosen is going in the 26th to 27th rounds of drafts.

Baldwin is currently being drafted in rounds 3-4 of drafts.

Gordon is going in the 4th to 5th rounds of drafts.

Jeffery is currently being drafted in rounds 5-6 of drafts.

Fuller is going in the 7th to 8th rounds of drafts.

Crowder was going in the 3rd to 4th rounds of drafts.

Parker is currently being drafted in rounds 9-10 of drafts.

Lee was going in the 13th to 14th rounds of drafts.

Meredith is currently being drafted in rounds 12-13 of drafts.

Washington is going in the 20th to 21st rounds of drafts.

Cain was going in the 25th-26th rounds of drafts

Barkley is currently being drafted in rounds 2-3 of drafts.

McKinnon is  is currently being drafted in rounds 2-3 of drafts.

Penny is currently being drafted in rounds 4-5 of drafts

Mack is currently being drafted in rounds 7-8 of drafts

Breida is currently being drafted in rounds 14-15 of drafts.

Engram is going in the 6th to 7th rounds of drafts.

Kittle is currently being drafted in rounds 11-12 of drafts.

Hurst is currently being drafted in rounds 20-21 of drafts.

Jackson continues to have a very good preseason and remains a strong stash in 2 QB / super flex leagues. Although Joe Flacco will likely remain the starter all season, Jackson would have immediate streaming appeal if given an opportunity to start.

Darnold had another impressive showing and has surprising mobility which should help his floor. Although Josh McCown is the starter heading into the regular season, Darnold is worth stashing in two QB / super flex leagues.

Confusingly Mayfield is being drafted over Taylor which is a mistake with Mayfield unlikely to see action. If Mayfield does take over it will not be until midseason or if the Browns are losing games and Taylor is struggling. Mayfield is worth stashing in 2 QB leagues but not in standard.

Marqise Lee suffered a season ending knee injury and was just placed on the IR. Westbrook and Cole have the most upside out of the remaining Jacksonville receivers. This is a situation to monitor as to which receiver can emerge with a large opportunity for targets with Lee hurt and Allen Robinson gone in free agency. Both wide receivers should be treated as high end FLEX options with WR2 upside depending on the severity of Lee’s injury.

Godwin was a popular sleeper last season and performed well in limited action. In a strong offense behind an ageing Desean Jackson, Godwin could carve out a larger this season. With FLEX/ WR3 upside Godwin makes for a solid late round flier if he can emerge this season.

As a former 1st round pick (9th overall) Ross should be given an opportunity in a decent offense that will be behind in games passing a ton. Dalton is a solid fantasy quarterback and A.J. Green should draw double coverage, Ross has WR3 upside and is worth a late round pick.

Allison is not the most talented receiver but should have a role after the departure of Jordy Nelson in a strong Packers offense lead by Aaron Rodgers. Randall Cobb and Jimmy Graham both have long injury histories and Allison could emerge with FLEX/ WR3 value if he can earn a larger role in the offense.

The Redskins signed Richardson this offseason and like his deep play ability making him a nice compliment to slot receiver Jamison Crowder. In a solid passing offense with an every down role Richardson has FLEX/ WR3 appeal in PPR.

Enunwa missed all of last season due to injury but broke out in 2016 with 58 REC, 857 YDS, 4 TD in 16 G. There is a huge opportunity for targets behind Robbie Anderson and Jermaine Kearse on a team that should be behind in games passing a ton.

Freeman’s ADP continues to rise and rightfully so, he has looked impressive in the preseason while Devontae Booker has struggled. While Booker could still have a large role in the offense, it looks like Freeman’s backfield to lose and he should be treated as the starter and an RB2.

With Rashaad Penny out for the rest of the preseason, Carson will get all the first team reps he can handle which should help build chemistry after missing most of last season. HC Pete Carroll loves Carson and has talked him up constantly stating he will receive a massive workload. In a strong offense that wants to rely more on the run game limiting Russell Wilson’s usage, Carson has an RB2 floor with RB1 upside.

Barber continues to outperform rookie Ronald Jones who has struggled mightily and has been criticized heavily by the coaching staff in Tampa. Barber should be treated as the starting running back but Ronald Jones will still have a role in the offense limiting Barber’s upside.

Although Joe Mixon is the perceived starter, Bernanard should be a significant part of the offense and is especially valuable in PPR leagues. If Mixon were to struggle or suffer an injury, Bernard would immediately gain RB2 value with RB1 upside in PPR.

The Bills continue to hold Lesean Mccoy  out of the preseason giving Ivory an opportunity to build chemistry with the offensive line and handle more 1st team reps. Ivory is a strong handcuff behind Mccoy due to his injury history, age and possible suspension.

Edmonds is having a very strong preseason and looks to have won the backup running back role behind David Johnson. Johnson missed last season with a dislocated wrist that required surgery and if he were to miss time again Edmonds would become a solid RB2.

Powell has not looked overly impressive but with Isaiah Crowell dealing with concussion issues- something he has dealt with in the past, he has an opportunity to expand his role in the offense. The Jets have been using Crowell more as a receiver something he never did in Cleveland with Duke Johnson there but Powell is still the receiving back in an offense that should be behind in games.

Peterson looked good coming off of a long layoff and could emerge with a significant role after Derrius Guice season ending injury. Samaje Perine and Rob Kelley are less than impressive options in the early down role and Chris Thompson will function as the pass catching back. Peterson offers very little as a receiver but could earn goal line opportunities and have low end RB2 value in standard and FLEX appeal in PPR.

Wilkins received the bulk of snaps and carries and looks like the preferred option for the Colts with Marlon Mack still sidelined with a hamstring injury. While this running back situation is one to avoid, Wilkins has talent and could be a solid FLEX option with RB2 upside if given touches.

Charcandrick West was recently cut making Spencer Ware the clear handcuff to own behind starter Kareem Hunt. Ware was solid in 2016 with 921 YDS, 3 TD adding 447 REC YDS, 2 TD before suffering a season ending injury last season. Ware should be rostered as an insurance policy for Kareem Hunt and could have RB1 upside if he were to suffer an injury.

Kelly has had a very strong preseason (46 CAR, 197 YDS (4.3 AVG), 3 TD) and looks to have won the backup role behind Todd Gurley, making him one of the strongest handcuffs to own in fantasy. Kelly would have RB2 upside if Gurley were to go down and is the recommended handcuff to own for Gurley owners.

Jonathan Stewart has looked absolutely horrible and there is talk of him even being a cut candidate. That seems unlikely given he was just recently signed this offseason but Gallman has overtaken him as the handcuff to own behind Saquon Barkley. Barkley has dealt with hamstring issues for most of the preseason and Gallman could have RB2 value if he misses time and FLEX value if given enough touches in PPR.

Gillislee looked like a cut candidate earlier in camp after being phased out last season and with Jeremy Hill performing well in the preseason. Gillislee’s strong performance will further complicate an already crowded confusing situation in New England. The goal line role for New England has significant value in fantasy and must be monitored (Gillislee had 8 TD in 15 G with Buffalo in 2016 and 5 TD in 9 G with New England in 2017.

Since Njoku’s breakout performance week 1 of the preseason vs. the Giants his ADP has continued to rise ADP – (TE) – 25 (OVERALL) – 204. For those who think the preseason does not matter Njoku went from a late round option to a borderline top 10 TE.

Marqise Lee suffered what looks like a long term to season ending knee injury opening up targets for all Jacksonville receivers including Jenkins. Jenkins has some offensive ability and could be a nice check down / red zone option for Blake Bortles, making him a solid TE2 with upside near the end of drafts.

Goedert continues to look impressive and is starting to emerge as a TE2 streaming option in certain matchups. With Alshon Jeffery out the first two weeks and Zach Ertz checkered injury history, Goedert is worth streaming and is a solid stash with TE1 upside.

Gathers has the most talent and upside but might not make the roster because of his inability to block. Blake Jarwin and Geoff Swaim are the candidates for the starting tight end job and this remains a position battle to monitor as the winner would have TE1 upside given the opportunity for targets.

Mixon has had a decent offseason and remains the lead back for the Bengals but will likely share touches with Giovani Bernard. Mixon is a bit of a risk at his current ADP with an underwhelming rookie year last season. Bernard presents a solid value toward the middle to late rounds of drafts as a handcuff behind Mixon and possible FLEX value in PPR.

Jones has looked horrible all preseason struggling with blocking, fumbles and as a receiver. The combination of Barber’s strong performance and the coaching staff’s love for him, Jones will likely have a limited role in the first half of the season. Jones is still extremely talented and should earn a larger role as he develops and the season progresses, making him more of a FLEX option behind starter Peyton Barber.

Crowell has been dealing with concussion symptoms something he has dealt with in the past during his time with the Browns. Powell will likely see a large role in the offense but Crowell presents a solid value at his current adp with RB2 upside.

With Freeman seemingly outperforming and claiming the starting role in Denver, Booker is becoming more of a handcuff/ FLEX option. There is still a chance for value if Freeman struggles or suffers an injury but Booker should be treated as the back up.

Hill has performed well in the preseason but a strong performance from Mike Gillisee will complicate an already crowded backfield. Hill is still a name to monitor if the Patriots decide to cut Gillislee and give Hill the goal line role.

(Stewart is having an awful preseason and has lost the number two running back job to Wayne Gallman. Stewart already had limited value as the handcuff behind rookie starter Saquon Barkley and is now no longer worth rostering).

With Rishard Mathews still sidelined and questionable for week one, Taylor has a chance to earn a larger role in the offense and earn more targets. Taylor has talent and could emerge as a FLEX option if he can receive enough looks in what should be a higher scoring Titans offense.