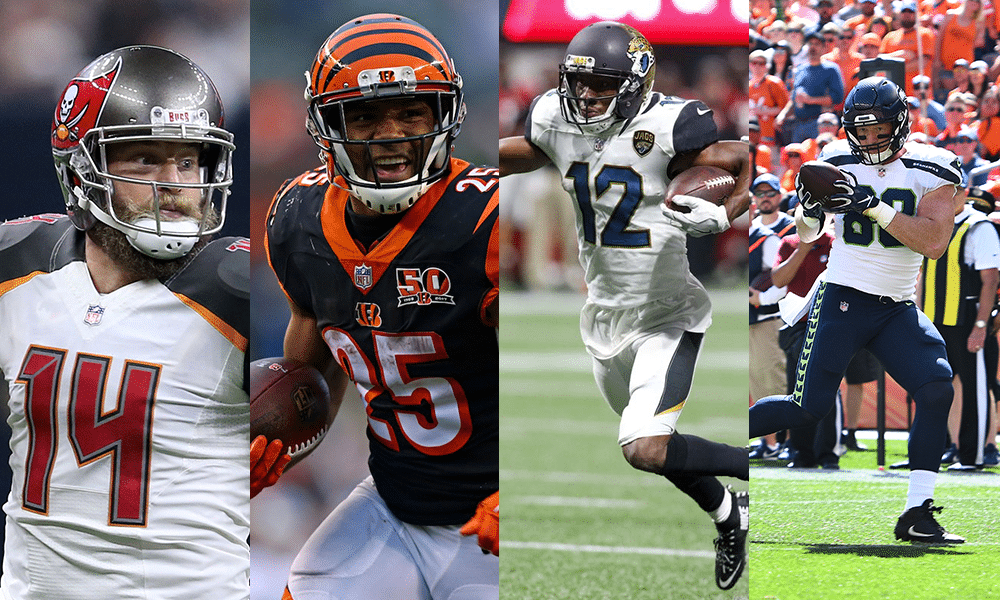 Fitzpatrick is having a historic start becoming only the third quarterback in league history with back to back 400 YD – 4 TD performances. Buccaneers HC Dirk Koetter has not committed to starting Jameis Winston once he returns from suspension giving Fitzpatrick the opportunity to win the starting job. In what should be a high scoring game vs PIT, Fitzpatrick should be treated as a top 10 QB.

Joe Mixon will miss the next 2-4 weeks undergoing cleanup surgery on his knee, leaving Bernard and 4th round pick Mark Walton. Walton is not a threat to Bernard’s workload vs a Carolina defense 25th in the league allowing 132 YDS per game. Bernard is also an exceptional receiving back and 100 total yards with a TD is obtainable on what should be a large workload. Bernard should be treated as a high end RB2 in PPR leagues.

Jay Ajaye missed most of the first half vs. Tampa and has a history of knee issues as well. With Darren Sproles already injured and nearing the end of his career, Clement needs to be owned as this situation works itself out. Clement impressed in limited action last season as a runner and receiver with 400 total yards and 6 total TD. If Ajaye were to miss significant time Clement need would become a solid RB2 in a strong offense.

While Alex Collins was the perceived lead back by many going in the 3rd round of drafts, Allen will just not go away even receiving a goal line TD last week. Allen has shown a solid floor with 850+ total yards in 2015 with 3 total TD & 6 total TD in 2017. In his fourth season with the Ravens Allen is also trusted more by the coaching staff as the pass blocking / receiving 3rd down back. Due to Collins fumbling issues Allen has carved out a role and is a FLEX in ppr leagues while serving as the handcuff to own behind Collins.

Jamaal Williams has failed to impress in the first two weeks Jones has missed, rushing for 106 YDS on 31 carries (3.4 AVG) adding 12 YDS on 6 catches. Jones is the more talented option averaging 5.5 YPC last season (Williams AVG’d 3.6) and due to Williams struggles Jones should see an opportunity to claim the lead role. Williams is a superior blocker and given he is protecting Aaron Rodgers that might give him the edge. Jones needs to be rostered as a bench stash until this situation resolves itself. If Jones were to claim the lead role he would have RB2 upside in one of the strongest offenses in the league.

Roster in 10-team leagues (as a bench stash)

Marqise Lee suffered a season ending injury in the preseason opening up targets for the remaining Jaguar receivers. While Keelan Cole is the more talented add and likely already rostered, Westbrook should also be owned. While the absence of running back Leonard Fournette lead to increased opportunities for the entire Jaguars offense, Westbrook offers solid FLEX value with WR3 upside.

With the recent trade of Josh Gordon to the Patriots a large amount of targets have opened up in a decent Browns offense. Like Gordon, Callaway has off field issues as well which lead to his slide in the draft to the fourth round even though Callaway has first round talent. While Rashard Higgins will also see increased targets, Callaway has superior talent and upside and should be treated as a boom or bust FLEX with WR3 upside.

While Dissly might not be the most athletic or talented receiver his blocking skills will keep him on the field and seeing targets. With Doug Baldwin out the next several weeks and Jimmy Graham gone in free agency there are abundant target opportunities, on a team that should be playing from behind. The tight end landscape is barren and Dissly has low end TE1 upside with Russell Wilson at quarterback.