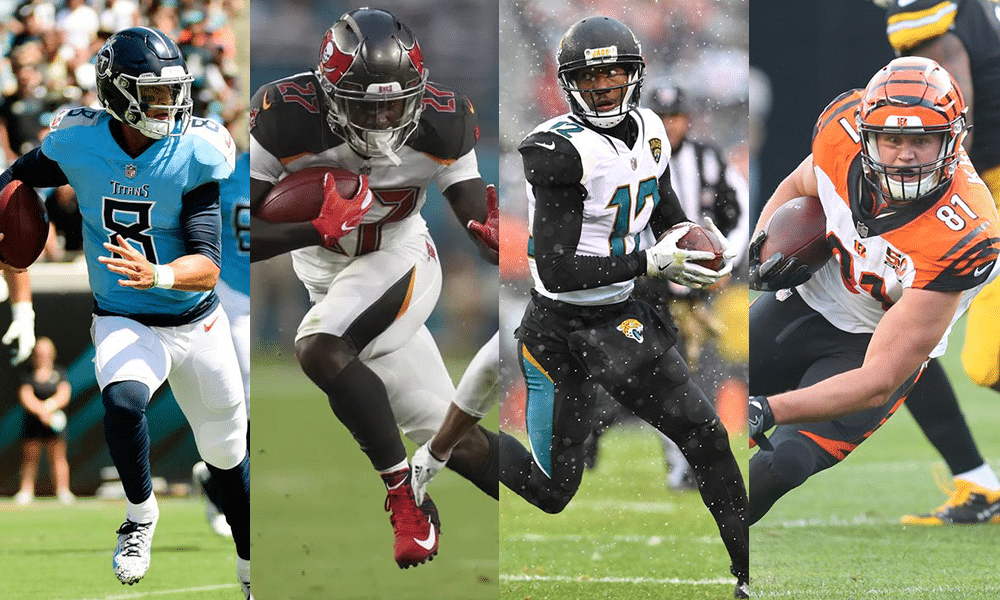 Coming off of an elbow injury versus a strong Eagles defense Mariota had an impressive performance in an overtime win. After failing to throw over 105 YDS in a game this season, Mariota had 115 YDS in the first quarter. Gradually developing chemistry with his #1 WR Corey Davis as the game progressed culminating in a game winning touchdown. While staying healthy has always been difficult for Mariota when on the field he has shown top 10 upside.

After slow start to the season Trubisky and the Bears dismantled the Buccaneers 48-10 in an impressive performance. As a former #2 overall pick surrounded by strong weapons Trubisky makes for a solid QB2 and streaming option in favorable matchups.

Carr struggled the first three weeks of the regular season throwing for only three TDs in difficult match ups (LAR, @DEN, @MIA). Against a strong Browns defense Carr and the newly formed Jon Gruden led Raiders offense broke out for 42 points in an overtime win. Jared Cook has emerged as a top five TE while Amari Cooper and Jordy Nelson present solid options at WR. Carr will likely never be a top 10 QB but is a strong streamer in favorable matchups.

Yeldon remains one of the best handcuffs to own in fantasy, given Leonard Fournette’s inability to stay healthy. Fournette re injured his hamstring in the second quarter and was quickly ruled out for the rest of the game and is expected to miss several weeks. Yeldon has performed extremely well when given an opportunity and is currently a top 10 RB in .5 PPR-standard leagues. For as long as Fournette is out Yeldon will remain a high end RB2.

Second round rookie running back Ronald Jones ll had a difficult preseason, leading to being healthy scratched the first three weeks. Luckily for Jones running back has Peyton Barber struggled as the starter (50 ATT – 148 YDS (3.0 AVG) 0 TD). Jones received 10 carries to Barber’s 7 versus the Bears and given Barber’s struggles Jones should have an increased role going forward. Jones has RB2 upside if given enough touches in a strong Buccaneers offense and should be owned in all leagues.

With Starter Chris Carson ruled out with a hip injury, it was not first round draft pick Rashaad Penny but Mike Davis who drew the start against the Cardinals. Davis exploded for 101 YDS on 21 carries adding 4 catches for 23 YDS with 2 TD. Carson is expected back next week but Davis has earned an expanded role while Penny continues to fade. Behind a weak offensive line in a complicated running back rotation, Davis has limited upside but is a pug and play FLEX / low end RB2 if Carson were to miss more time.

Westbrook saw 13 targets versus the Jets and is quickly becoming Blake Bortles favorite target in a solid Jaguars offense. With Leonard Fournette once again dealing with a hamstring injury and likely out several weeks, the Jaguars offense should lean more on the pass increasing opportunities for Westbrook. For as long as Fournette is out Westbrook should be treated as a high end WR3 with WR2 upside if given targets.

With TE Delanie Walker out for the season and WR Richard Matthews recent release there is an increased opportunity for targets in Tennessee for the second year receiver. Marcus Mariota finally looks healthy and the emergence of Corey Davis should open up space for Taylor to work out of the slot. Taylor should be treated as a volume based WR3/ FLEX.

A fourth round rookie out of Texas Tech Coutee emerged as Deshaun Watson favorite checkdown option seeing 15 targets in an overtime win against the Colts. With injury prone WR Will Fuller once again dealing with a hamstring injury, Coutee could be in line for a bigger role in a strong Texans offense and holds WR3 / FLEX upside.

Tyler Eifert is out for the season with a broken ankle and Tyler Kroft is next in line to replace him. Kroft performed well last season catching 42 passes for 404 YDS and 7 TD showing good chemistry with Andy Dalton. That production was in a struggling Bengals offense that ranked near the bottom in pace and plays per game. The Bengals offense looks  improved this season and Kroft could have low end TE1 given the all injuries this year at the position.

With O.J. Howard out the next 2-4 weeks with a knee injury, Brate should have an increased role in an explosive Buccaneers offense. Brate has had success in the past especially as a red zone threat with 8 TD in 15 G in 2016 and 6 TD in 16 G last season. For however long Howard is out Brate should hold low end TE1 value.