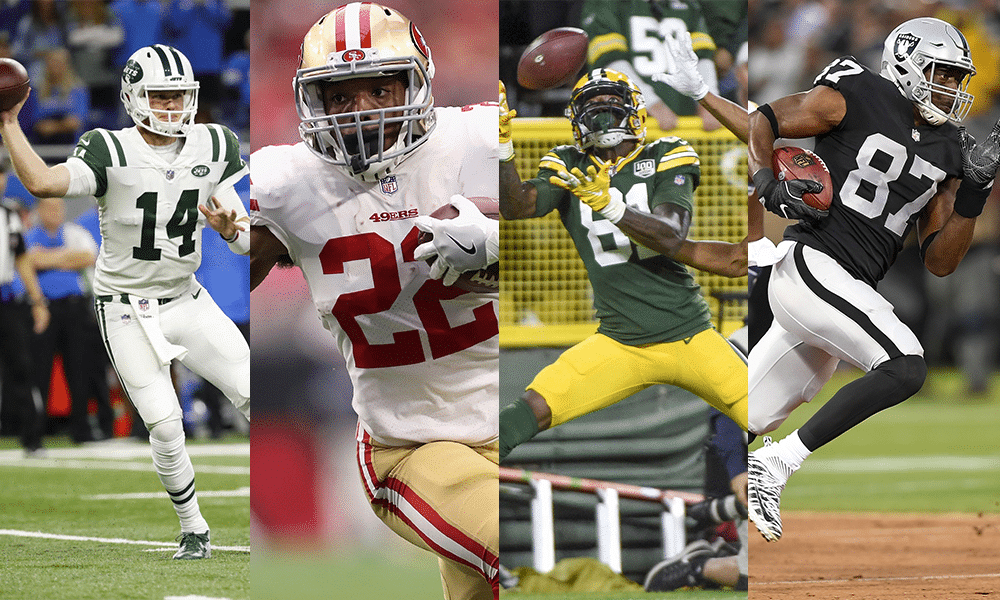 After throwing a pick six on his first career pass in his first career game, Darnold looked very impressive against a solid Lions defense. With strong WR options in Robby Anderson and Quincy Enunwa, Darnold is a solid streaming option and QB2 in super-flex leagues.

As expected Alfred Morris saw early down work and Brieda functioned as the passing down back. Both backs struggled against a strong Vikings defense with Morris fumbling at the goaline. Breida is the younger, more talented option and in PPR leagues should be treated as a high end FLEX with RB2 upside.

With Marlon Mack sidelined, Wilkins received the majority of snaps and looked good against a solid Bengals defense. Wilkins has an opportunity to wins the Colts lead back postion or at worst, function as the goal line back once Mack returns. Andrew Luck looked healthy and Wilkins could offer RB2 upside if given snaps but will likely function as more of a FLEX option.

Royce Freeman was the expected starter and lead back but Lindsay saw the same amount of touches and looked explosive. Devontae Booker has moved to third on the depth chart making Lindsay not only the handcuff to own behind Freeman but a FLEX option in PPR.

Jaguars starting running back Leonard Fournette went down in the second quarter with a hamstring injury vs the Giants. Hamstring injuries tend to linger and Fournette has also dealt with ankle injuries in college and last season. Yeldon is the handcuff to own over Corey Grant and would be a solid RB2 if Fournette were to miss time.

Although Allison is the fourth option on offense behind Davante Adams, Jimmy Graham and Randall Cobb but any Aaron Rodgers led offense can support multiple receivers. All three players also have checkered injury histories and if any of them were to go down Allison would be a solid WR3 with WR2 upside.

Although DeSean Jackson had a huge game but Godwin is still the favorite to be the second option in the Buccaneers offense behind Mike Evans. Ryan Fitzpatrick and the Tampa offense dismantled the Saints defense (a top 7 unit last season) and Godwin has WR3/ FLEX upside.

Enunwa is coming off of a major injury which caused him to miss all of last season but he was a solid WR3 the prior. Enunwa also looks to be the preferred to Robby Anderson who only received one target and Enunwa was also trusted by Darnold on 3rd down. Jermaine Kearse will return soon and hurt Enunwa’s value but he is a solid WR3 / FLEX.

With Baldwin suffering an MCL sprain and likely missing the next 2-4 weeks, Marshall should be a much larger part of the offense. At 6’5 Marshall was targeted heavily in the red zone catching two TDs with one being called back due to a penalty. While Baldwin is out Marshall is a solid WR3 / FLEX play in 12 team leagues.

Against a weak Colts defense Ross could have had a much bigger game but it was still nice to see him targeted in the red zone. A former 1st round pick Ross has the potential to carve out a major role in a solid Bengals offense and has WR3 / FLEX upside.

Cooks looks to be one of Derek Carr’s favorite targets and has considerable athletic ability and offensive potential. That said Cook has shown flashes in the past and disappointed offering more boom or bust potential than a solid floor. With Delanie Walker out for the season and Greg Olsen out several months, Cook needs to be added with TE1 upside.

Watson is a solid veteran TE who has had strong seasons in the past (74 REC, 825 YDS, 6 TD in 2015 with the Saints) and has streaming appeal in a potent offense. Drew Brees also trusts Watson and he makes for a solid TE2 with back end TE1 upside if given enough targets.

Delanie Walker suffered a season ending ankle injury in the Titans loss to Miami on Sunday, forcing Smith into a starting role. Smith has considerable upside in a solid offense and Walker’s large target share must be replaced making Smith a solid TE2 with back end TE1 upside.

Greg Olsen re fractured his surgically repaired foot that caused him to miss most of last season, forcing second year player Ian Thomas into a starting role. Thomas is an athletic freak and could be a streaming option in deep leagues but is more of a name to monitor.

While Chubb does have potential he is more of a dynasty option in his first season playing behind starter Carlos Hyde and pass catching running back Duke Johnson. Chubb is also a name to monitor incase of an injury to Hyde who has dealt with injuries in the past.

Jones was an inactive sunday after a terrible preseason losing any possible chance of a starting role to Peyton Barber. Jones is more of a name to monitor on the wire incase he can regain the confidence of the coaching staff and carve out a role later in the season.

Meredith was inactive sunday after barely playing in the preseason due to an injury and is the fourth option behind Michael Thomas, Alvin Kamara and Ted Ginn. Meredith has upside in a strong offense but is more of a stash and name to monitor on the waiver wire.

Walker suffered a gruesome season ending ankle injury and as an older player his career might be in jeopardy. Jonnu Smith is the next in line and has considerable upside.