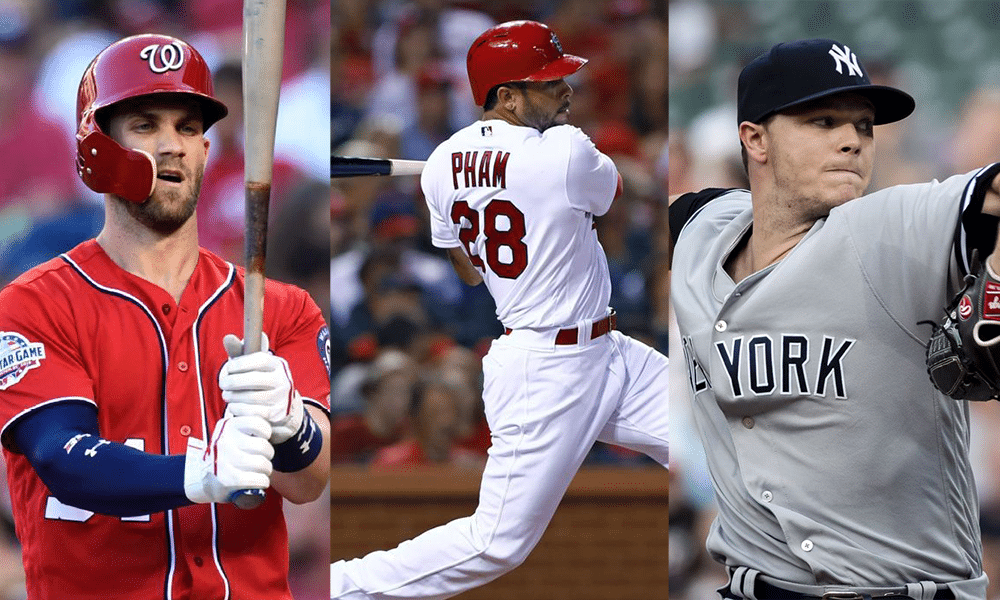 Over the course of the season, each one of these players has had some success but their overall numbers are not what fantasy owners anticipated on draft day. Now that the season is nearly 60% of the way to completion, there’s quite a bit of data to comb through. I wanted to take somewhat of a deep dive into the two hitters, Bryce Harper and Tommy Pham, and one pitch, Sonny Gray to see what has gone wrong. I’ll look at each player’s outlook for the rest of 2018 to help figure out what to do with them.

The Home Run Derby Champion has had an interesting season, to say the least. There’s been a lot of talk about the shift killing Harper’s BABIP and batting average in 2018. Is it justified? Well, Harper has been shifted on nearly 87% of his at-bats in 2018 compared to only 33% throughout his entire career. Compound that with the fact that nearly 63% of Harper’s ground balls are hit to the pull side, compared to 50.6% over the course of his career. It’s easy to see that the shift has been a factor in the BABIP reduction. Unfortunately for Harper, teams will continue to deploy the shift against him, so unless he adjusts his heavy ground ball pull tendencies, his BABIP and batting average on ground balls will continue to be quite a bit below league average.

Taking a look under the hood, Harper’s batted ball profile is stronger than it’s ever been and the results just haven’t been there outside of the power numbers. Take a look at the table below displaying the Harper’s BABIP and batted ball percentage on certain types of batted balls versus his career rates.

I’ve already discussed the shift and its significant impact Harper’s ground ball BABIP, but what’s the reason for the low BABIP on fly balls and line drives? Not only are Harper’s numbers well below his career rates, they are far below league average as well. I included Harper’s hard contact, infield fly, and line drive rates to show how his profile is actually stronger than in years past. It’s possible the shift is hurting some of Harper’s line drives as well as he’s also pulling over 60% of his line drives. Harper did a good job of spraying his line drives to the opposite field in 2017, so it’s highly likely that a few hard line drives have been grabbed for outs instead of singles.

Then, there’s the plate discipline and strikeout rates.

While they don’t affect BABIP, his increased strikeout rate is clearly justified by the decrease in contact and zone contact. Harper is not known for elite plate discipline but his contact rate is 10% below league average and the swinging strike rate is 3.5% above league average. For context, Harper’s contact percentage of 69.1% sandwiches him between Javy Baez and Chris Davis.

For the second half, I don’t see a full rebound from Harper. While Harper’s been plagued with some bad luck, his poor plate discipline and the increase of defensive shifts will continue to hurt his batting average going forward. The fly ball rate and hard contact look great, so his power numbers should continue to be there. I just can’t fully buy into his 1st round draft day value even if he’s one of the few hitters who can go off for 25 homers in the second half. I see the average settling around .240-.250 by season’s end.

What’s up with Pham? I was very impressed with his numbers in 2017 as he was able to hit for power, average, and showed speed. Pham had elite plate discipline especially in the second half where he was second to the great Joey Votto in terms of laying off pitches outside the zone. Pham started 2018 much like he finished 2017 poised to provide 25/25 production with great on-base skills. Then around mid-May, his unsustainable .400 BABIP fell off the map and has been sitting under .300 ever since. 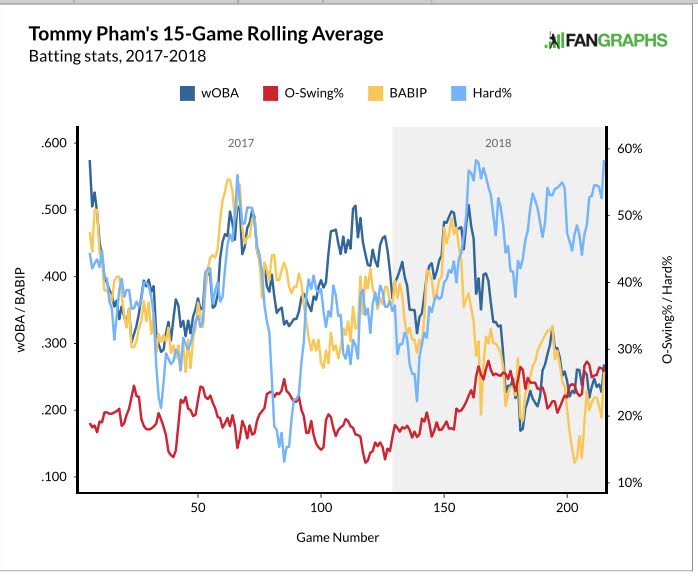 Hmmm, so his O-Swing has jumped up but it’s still well below the league average of 31%. Take a look at Pham’s hard contact. Over the last season and a half, it’s never been higher than it is right now! What’s the deal? A quick look at his batted ball profile shows me that he’s absolutely raking going the other way. His line drive rate is nearly 40% to the opposite field and his wOBA is an astonishing.488! That’s fantastic, hitting a ton of line drives to the opposite field is a great way to boost BABIP, so what’s Pham’s excuse for the BABIP decrease?

It’s ground balls to the pull side. Nearly 75% of Pham’s pulled batted balls are on the ground. Does this sound familiar? Just like Harper, he’s pulling too many grounders.But unlike Harper, Pham doesn’t get the shift because he sprays balls to all fields at high rates. In any case, it’s hurting his BABIP to a lesser extent which is currently .241 to the pull side.

Overall Pham has been a bit unfortunate and his prospects for the second half look good. His average exit velocity ranks 24th among qualified hitters and is up nearly three miles per hour from 2017. Pham’s average launch angle is down a bit but that can be deceiving because he’s cut his popups by 4.5% per xStats.org. His high drive and low drive rates have both improved which are the most valuable types of batted balls. I don’t necessarily see Pham improving in terms of power, but there’s nothing there in his profile that shows regression either.  He just hit his 14th home run of the year on Thursday night and 20-24 HR by season’s end is a reasonable projection. I do see a significant batting average improvement from Pham in the second half based on his batted balls and exit velocity. I’m buying him now before he really heats up.

Gray is one of the most disappointing pitchers this year based on expectations and results. His velocity is just fine, it’s identical to last year. His arsenal has been tweaked a bit increasing the curveball and using his fastball/sinker a little less. Nothing too dramatic though and his home run rate and strand rate match 2017 as well. Overall, Gray’s strikeout and walks rates are a little off from 2017 and as a result, his K%-BB% is down three percent. OK, so giving up a few extra free passes hurts especially when his BABIP is .327. That’s high but not crazy except when you consider Gray typically suppresses BABIP to the tune of .282 for his career.

Based on that information, I’d expect some regression, but not to the extent he has in 2018. In 2017, Gray was successful because he had three plus pitches, his slider, curveball, and fastball. This year, the curveball is great with a 39.6% chase rate and a 15.1% swinging strike rate, both are improvements from 2017. The slider, which was dominant in 2017 still has a fantastic 41% chase rate and an 18.8% swinging strike rate. Believe it or not, those are both down from last year. Gray’s slider was so good last year, he gave up an OPS of only .374 against it! He was set up to fail because there was no way he would repeat those numbers. This year it’s still a solid pitch with an OPS of .636. It’s basically a wash, the curve improved and the slider regressed.

Oh but then there’s the four-seam fastball. His fastball and sinker combination has been atrocious. Gray has allowed a wOBA of .414 against his fastball this year. His four-seamer velocity is good but it has less horizontal and vertical movement. The chase rate against it is under 20%, so batters are teeing off inside the zone. The sinker has been better with a .338 wOBA but that’s also a slight regression from 2017. The difference is Gray can’t get any swings and misses on the pitch. The sinker’s zone contact is up 10% from last year. Then there’s the changeup. Gray needs to drop this pitch completely. He’s thrown only 62 of them and given up a 96% contact rate with a .571 average against! Here’s a tip, simply eliminate that pitch, Sonny. To Gray’s credit, he basically has because it went from 8.5% usage in April to 1.3% in June and July.

For fantasy owners, it’s tough to recommend Gray because he needs to increase his curveball and slider usage to over 50% combined for the two pitches. He’s currently around 40%. The fastball usage really needs to be below 25% but it’s one of the few pitches, along with the sinker that he can throw for strikes consistently. The slider has a very low zone percentage, so it’s really just a wipeout pitch. That being said, I don’t think he makes a full adjustment in the second half to be the sub-4.00 ERA pitcher he was a year ago. Even if he does make an adjustment, he still needs to use the fastball for strikes and the lack of movement is causing it to get hammered. Gray can be left on waivers in shallow leagues and I’m not recommending him as a target in deep leagues either. I don’t think he will finish with an ERA over 5.00 but that doesn’t mean he will be useful for your pitching staff.