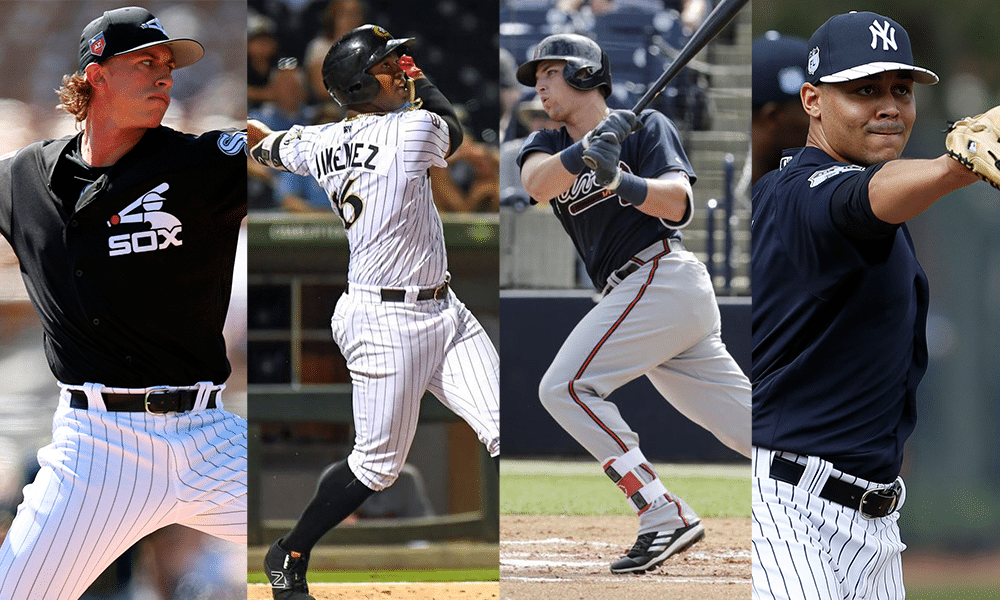 Towards the end of the year teams begin to test the waters with minor leaguers who have proven themselves at the minor league level. It’s time to see if they can help out a team down the stretch on a playoff run, or test them out for next year if the season outlook is not that promising.

These minor leaguers, these prospect studs, have the potential to be impact players. But, it can cut both ways, as the polish is not always there, and their performance can be very volatile. Let’s take a look at some of these potentially impact players that will most likely be making an appearance in the majors soon.

Kopech is locked in for a Tuesday start against the Twins for his major league debut. Kopech is the number 2 prospect in the White Sox system, and number 16 overall in the minors at the moment. Kopech has a really intriguing profile as a flamethrower with amazing swing and miss stuff. It’s just a matter of keeping it in the strike zone with Kopech. His ERA has always sat in the healthy 3s and but the walks have hurt him previous years in ratios. In his last few starts he has begun to turn things around. In his last 7 starts he has pitched 44 innings, struck out 59 and only walked 4 batters. A truly phenomenal change. If he can locate in the majors he will provide excellent strikeout numbers and solid ratios.

When we mention the White Sox in any capacity, Eloy needs to at least be discussed briefly. It wasn’t long ago that the White Sox officials spoke about Jimenez as being ready for the majors. So when we hear about Kopech coming, it certainly seems like the path could be open for Jimenez, right? “Everyone in Triple-A is close,” Hahn said. “By definition, they are a level away from being in the big leagues. There was not any intention in terms of foreshadowing an imminent move with that comment. It was just a statement about him making progress this year.” Really? I mean, really? There’s no real reason to be holding Eloy back, as he has nothing left to prove in the minors. If anything the Sox are trying to manipulate service time, as he has hit .338 with 11 home runs and a great eye at only a 13% walk rate in 41 games of Triple-A ball. So, there is definitely a strong chance he will still get called up this season, although it won’t be immediately. When he does he can be a top-notch hitter with average and power.

Gonsalves was called up for the Twins to start on Monday against the White Sox. He’s the Twins number 5 overall prospect and has a solid but unspectacular ceiling. He’s a southpaw with a low 90s fastball and a solid changeup to make for a decent two pitch mix, alongside a couple curves thrown in for good third pitch measure. He’s had solid strikeouts backed by a solid swinging strike rate, but control has been a big difficulty for Gonsalves. He’s held a 13% or nearly a 5 walks per nine ratio over Double and Triple-A. That lack of control will be a big difficulty, especially if he has a hard time adjusting to the major league strike zone. He’s shown some improvements, with 5 of his last 7 starts having 2 or less walks. Gonsalves has a ceiling of a good (not great) starter with league average strikeouts and ratios. However, the team context is weak and will definitely not provide many wins.

The 24 year old was drafted as one of the most exciting power bats in the 2015 draft, and has done well proving the power is real. He has 20 home runs in the minors this year, to go along with a total of 58 homers in his first two pro ball seasons. He does have a fair amount of swing and miss in his game, but he has shown some improvements. His offensive profile does include a solid amount of walks as well, adding to his value as an on-base and power outfielder. While his defense is less than stellar, his work ethic makes the Tigers confident that he will not be stuck at the DH position. Recent struggles at the plate and the necessity of putting a player through waivers seem to be what really stands in his way at the moment. Detroit will want to give him a chance and play his bat sooner than later.

Riley has a plus power tool with the ability to still hit for average with a solid hit tool. He profiles as a power hitting, run producing, corner infielder with a bit of swing-and-miss in the profile. Riley has been striking out about 25-30% of at-bats throughout his career with an average walk rate, so the on-base skills are not completely there. Atlanta’s clearly not afraid to start rookies as shown by how much stock they have put in Albies, Acuna Jr. and even some of their starters more recently like Touissant. That being said, Camargo is currently manning 3rd base and is hitting close to .300 on the month and has had an above average season by his 113 wRC+. If the Braves need an infusion of offense, I doubt they would hesitate to call up Riley. While not at the same level as Eloy, he can give solid power and average down the stretch.

This call-up could be the result of a banged up and disappointing rotation on the part of the Yankees. Severino has been shaky lately, and CC is down with more knee concerns. Happ pitched well in his last start and the bullpen is stacked but the Yankees could still use rotation help down the stretch. Sheffield has potentially three plus pitches, and was blowing by batters, striking out a massive 34% of batters in Double-A before moving up to Triple-A and still finding success with a lesser 23% K rate. His walk rate could use some improving, but between the strikeouts and a solid ground ball rate, he’s managed to keep ratios down. If he gets the call he could help the Yankees bridge the gap more consistently to their amazing bullpen with good Ks and ratios.