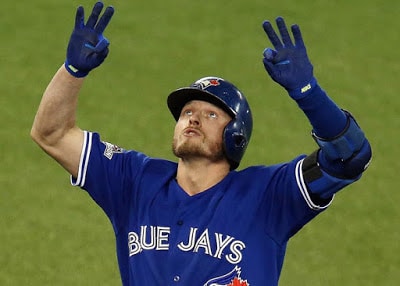 * All Percentages are based on 12-team league, standard-scoring settings in Yahoo leagues

Braves acquired 1B Lucas Duda from the Royals for cash considerations or a player to be named later.

The White Sox have stated that Eloy Jimenez will not be called up to the majors in 2018.

Indians acquired 3B Josh Donaldson from the Blue Jays. He is still rehabbing from his calf injury.

Jesse Winker – CIN – OF (Out for season) SHOULDER SURGERY

Yoenis Cespedes – NYM – OF (Out for the season) ANKLE SURGERY

Nimmo came back from the DL on Tuesday, returning from a finger injury to the Mets lineup. Not that the Mets lineup is particularly fearsome, but Nimmo can be one of the better parts of the lineup when playing. Immediately after coming back into the lineup, he collected 4 hits in his first two games and drove in a run. Nimmo had a burst of productivity earlier in the season where the spotlight shined on him, but he struggled across the summer. During the time he has played in August, his hard hit rate is back up and he is hitting .350 with a couple homers and a steal. Nimmo has a safe floor with an above average walk rate, a penchant to steal, some pop and a solid batting average. Pick him up, especially if you have more than 3 OF spots on your roster.

O’Neill has always displayed a ton of power in the minors. He blasted 26 home runs in the minors in under 300 plate appearances, on top of the 7 he has in the majors. Of course, the biggest problem he has had in the majors is a glaring 40% K rate. Looking by pitch, it seems like he has really struggled against the breaking ball :

Fourseamers, and sinkers he has seen a good amount of and fared well. Sliders and curves, not so much. While it is concerning, strikeouts will most likely always be on the higher side for O’Neill, but he hasn’t had a K rate over 30% since 2015. He’s also crushing the ball with a hard hit rate of 42% and a flyball rate of 42% to match. When he hits the ball in the air, he does a ton of damage. O’Neill has a good chance to provide some power and even chip in a few steals. He’s also going to give you power while chipping in a solid average.

If you had heard that an Astros prospect was called up and was raking for the Astros, most people would have assumed that it was Kyle Tucker. However, White is the call-up that has hit 11 home runs in 139 plate appearances and is batting .317. He’s been an important sparkplug in the injured Astros lineup, and has been able to give power, average and counting stats in a powerful offense. The big concern for a while was playing time, and where he could get into the lineup, but the Astros have shown they are willing to bench Gattis in favor of White in order to get his bat into the lineup, giving him a chance to get in at 1st and DH. At this point, there is no reason to believe he will not continue to provide power and counting stats in the Astros lineup.

Urias was just recently called up to the majors by the Padres to fill a position in the infield. Take a look at our earlier article for more details on Urias. The top second base prospect has an advanced approach at the plate and an ability to hit the ball well to all fields. While not much power has manifested yet, he has a healthy line drive rate and could develop more power to go with his average in the future. In fact, he displayed some power and his hit tool as he went oppo taco for a solo shot in just his fourth game in the majors. He should be a good pickup for middle infield average.

While it has only been about 50 plate appearances, McKinney has been on fire after being called back up mid-August. He has hit for power, average and even taken a fare share of walks. With the amount of outfielders the Blue Jays have at their disposal, it was a little concerning that he would not have much of an opportunity to play, but the Jays have consistently been putting him into the lineup, and his production has rewarded them. He has shown decent plate discipline so far this season but has never been better than league average in strikeouts, so his value is really limited to some power and potentially a bit of average help, but only while he continues his hot streak.

Voit has been crushing baseballs since he arrived in New York. While he is another hot bat with a small samples size, he has a few advantages going his way. First, being in the Yankees lineup will clearly help his counting stat production moving forward. Second, hs competition at first base has been Greg Bird, who is not putting together a productive season (offensively or defensively). Third, Voit has batted .326 with 4 home runs and 11 RBI in the 12 games he’s started (and a few pinch hit appearances) since moving to the Yankees. As long as he continues to get at-bats he should provide solid power and counting stats for the Yanks rest of season.

Somehow, Wendle is the 28th best fantasy player (according to Yahoo) in the last 14 days, batting .333 with a home run and 4 steals. On the season he has 446 plate appearances and is batting .296 with 7 home runs and 12 steals, giving him a chance to bat .300 and reach double digit home runs and steals in less than a season worth of at-bats. He also has been used across the diamond (naturally, it’s the Rays after all) which gives him some flexibility off the bench and could make him a useful contributor in deep leagues. Things you probably didn’t know about Joey Wendle : in the second half he has been 37% better than the league average hitter, has hit .326 and stolen 5 bases.

Interested in O’Neil but he’s taken or you don’t care about getting a couple steals? Try on Tyler Austin for size for some serious (and less popular power). He’s gotten regular at-bats since joining the Twins, and has  7 home runs in 68 plate appearances. Take a look at this home run per plate appearance leaderboard for batters with over 200 plate appearances :

Austin has the second best ratio of home run to plate appearances, only trailing Muncy. He’s getting more plate appearances, and with a 46% hard hit rate on fly balls, a bunch of those are going to turn into big flies. If you just need cheap power, pick up Austin, he’s available in 95% of leagues.

Roster in deeper leagues (or as a home run stat specialist)

Which starter would you rather have? What if I said one starter is 82% owned and the other is 20% owned. Player A is Rich Hill, and Player B is Joey Lucchesi. They’ve been almost exactly the same pitcher this season and the price gap is that expansive. Lucchesi is definitely without the support of that Hill has but has managed to get one more win in 2 more starts and only a few more innings. He’s also got a 3.18 ERA in August with a 30 % K rate.

Giolito has not had a fantastic season, and his bloated 5 plus ERA makes that very clear. What is encouraging is that, over his last few starts, his K rate has started to climb again. Over his last 5 starts, he has surpassed over a K an inning, which, considering his 6K/9 on the season. His fastball has improved, but especially his changeup has started doing work over the last couple starts. Also encouraging to his K rates is his velocity.

With the velo rising, so has the K rate, an encouraging sign that three years in, he might be figuring out how to play his changeup off a better fastball. Definitely some potential for the post-hype prospect moving forward.

In 54 innings in the second half Marquez has a 2.80 ERA, a 30% K rate and 50% ground ball rate. Even his ERA indicators support a sub 3 ERA in the second half, which, being 50 plus innings in, is very impressive. If you are worried because he has a few home starts scheduled rest of season, it’s understandable, Coors is obviously a red flag. The Rockies this season have been able to manage Coors well at times, so let’s look at the 1st / 2nd half home splits for Marquez.

A rookie holding down a sub 3 ERA through 55 innings is solidly impressive. He has managed to be a pleasant surprise in a Cardinals rotation that has struggled at times without C-Mart taking the lead as a anchored Ace. Gomber doesn’t have overwhelming stuff, and has struck out a league average amount of batters while walking a bit more than league average. That is less impressive. The low HR/FB rate and high strand rate shows that he is likely to regress to above a 3 ERA. Still, he’s limiting the damage (fly balls allowed have a solid 25% soft hit rate) and avoiding the long ball, a recipe for success. The Cardinals are making a legitimate run for postseason contention and have a dynamic offense that can also provide him some wins.

The White Sox has another closer by committee situation, but Fry has started to pull away lately and might secure the job. He has 3 saves in the last 6 games, and while he struggled in July, he has turned it around in August with a 20 Ks in 10 innings. A 35% K rate on the year with a 25% hard hit rate and a 45% ground ball rate give him a solid profile for getting outs in a variety of ways.

Since returning to the Phillies bullpen on August 15th, Neris, in 9 innings, has struck out 20 batters. That’s out of 32 batters. With 0 runs and only 3 hits. He’s been absolutely incredible. While the closer spot has been rotated in Philadelphia, and in the last 30 days the committee has consisted of Dominguez, Neshek, Hunter and Arano. If Neris continues to pitch this way, it’s likely that he can continue help produce in ratios and snag a couple saves.

Chavez has a more niche fit for fantasy players who are looking for a long reliever to help out in Ks and ratios. In the second half, Chavez has a 1.07 ERA in 25 innings while striking out 31 Ks (34%) and 2 BBs (2%). He pitched over 50 innings in the first half and can help you, especially in deep leagues contribute to great ratios and K rates down the line. With Morrow on the DL, he has also picked up a couple of saves in his absence.