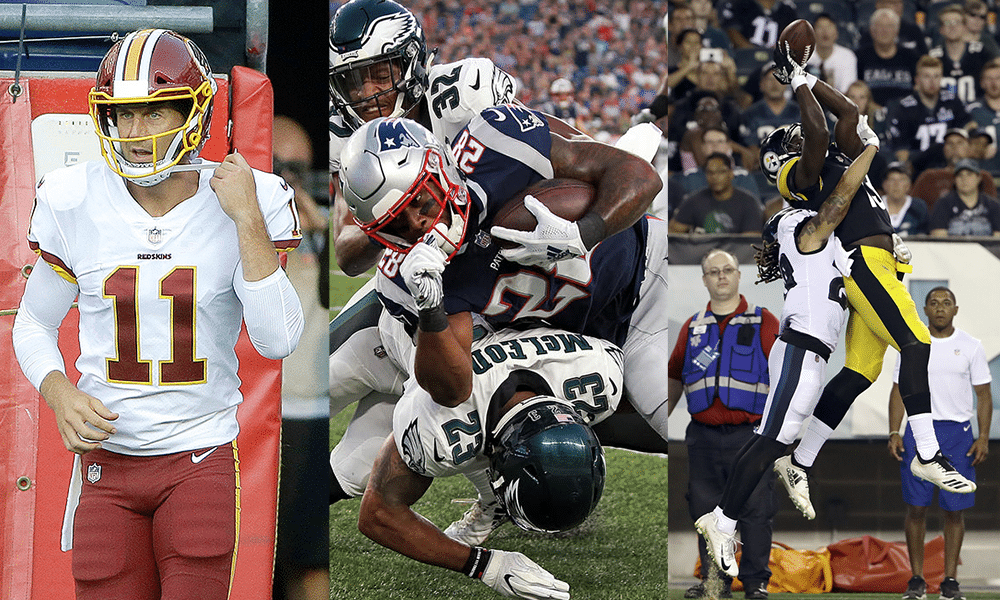 Perine limped off of the field after a 30 yard run his only carry of the night. Derrius Guice is out for the season Robert Kelley should see increased touches.

Williams has avoided a high ankle sprain and is considered day to day. If the injury proves to be serious Ty Montgomery should see a large workload until Aaron Jones returns from suspension.

Smith was 4-for-6 passing for 48 yards in Thursday’s preseason game versus the Jets.

(Smith looks like a very good fit in HC Jay Gruden’s offense in Washington. An offense that has produced top 10 fantasy QB production (Kirk Cousins) the past several seasons. Smith himself finished as a top 5 QB last season in Kansas City although surrounded by more talent on offense. At his current ADP Smith is a very good value for those waiting to draft QB late and in two QB leagues)

Darnold was 8-for-11 passing for 62 yards with 0 TD / 1 INT in Thursday’s preseason game versus the Redskins.

(Darnold struggled in comparison to his performance last week (completing 13-of-18 passes for 96 yards 1 TD / 0 INT versus the Falcons) Teddy Bridgewater looked good and could become a threat to Darnold, forcing him to third on the depth chart. Bridgewater could also be traded and it is likely Darnold gets to start at some point this season over Bridgewater. Darnold could be a decent streaming option in solid match ups with garbage time / volume based production).

Hogan had 5 receptions for 25 yards (5 AVG) with a TD in Thursday’s preseason game versus the Eagles.

(Hogan had a breakout season last year with 34 receptions for 439 YDS and 5 TD in only 9 games. With Edelman suspended the first four weeks and Brandin Cooks departure to the Rams, Hogan should be looking at an expanded role in a strong Patriots offense. Rob Gronkowski is also extremely injury prone and Hogan has WR1 upside in the event of an injury).

Washington had 5 receptions for 114 yards (22.8 AVG) with 2 TD in Thursday’s preseason game versus the Packers.

(Washington continues to impress after posting 44 yards on 2 receptions last week vs the Eagles. With Martavis Bryant now in Oakland there is an opportunity for Washington to earn a larger role in the offense. But as the fourth option behind Antonio Brown, Le’Veon Bell and JuJu Smith-Schuster that role will be a very limited one. Washington is more of a name to monitor in the event of an injury or expanded role in the offense with W3/ FLEX upside).

(Montgomery was a top 5 option at RB before suffering broken ribs last season and with Jamaal Williams (ankle) and Aaron Jones (suspension) possibly out week 1, Montgomery should be looking at an increased workload. Williams is likely the early down back with Montgomery functioning as the pass catching back. Aaron Jones return from suspension week 5 will complicate things but at his current ADP Montgomery is the best value. In PPR Montgomery could emerge as a strong FLEX with RB2 upside).

(White looked explosive with multiple plays for over 20 yards and finding the endzone. Sonny Michel (knee) is questionable for week 1 and Rex Burkhead is dealing with a small tear in his knee after missing 6 games last season with knee issues. White could see a large workload early in the season and if produces earn a larger role becoming a strong FLEX option in PPR with RB2 upside).

Hill had 6 carries for 31 yards (5.2 AVG) in Thursday’s preseason game versus the Eagles.

(Hill is still only 25 and had a strong start to his career with the Bengals in his first three seasons averaging 919 YDS and 9.6 TD. With Michel and Burkhead dealing with injuries Hill has an opportunity to earn a larger role. The goal line RB for the Patriots is productive role with LeGarrette Blount scoring 18 TDs in 2016 and Mike Gillislee scoring 5 in only 9 games last season. If Hill can earn the goal line work, he could become an RB2 in standard and FLEX option in PPR).

Conner had 5 carries for 57 yards (11.4 AVg) with a TD in Thursday’s preseason game versus the Packers.

(Conner looked impressive on a 26 yard TD run and has some potential but playing time will be difficult in Pittsburgh. One of the best handcuffs to own in fantasy behind Le’veon Bell in a very strong Steelers offense, Conner is worth stashing. I would advise Bell owners to roster Conner as a bench stash insurance policy incase of injury. If Bell were to suffer an injury Conner could easily be an RB2 with RB1 upside – DeAngelo Williams in 2015).

Kelley had 7 carries for 17 yards (2.4 AVG) adding 1 reception for 13 yards in Thursday’s preseason game versus the Redskins.

(Kelley is not the most talented RB but could be looking at an increased workload with Guice out for the season, Samaje Perine dealing with an ankle injury and Chris Thompson who has a long injury history benefiting from limited snaps in an effort to remain healthy. With 704 YDS and 6 TD in 16 games during the 2016 season Kelley has shown a decent floor and ability to finish in the RZ. A strong short yardage option Kelley could also find himself with GL opportunities making for a low end RB2 in standard and FLEX option in PPR).

Goedert had 3 catches for 57 yards (19 avg) in Thursday’s preseason game versus the Patriots.

(Goedert caught  4 passes for 66 yards and 1 TD in last Thursday’s preseason game versus the Steelers and could be forcing his way into a larger role. Goedert was already being talked up as a strong red zone threat (11 TD in 13 G – 2016 & 7 TD in 14 G – 2017 last two seasons in college). If Zach Ertz were to miss time Goedert would become an immediate add with TE1 upside in a strong Eagles offense).

Burkhead did not play in Thursday’s preseason game versus the Eagles.

(The Patriots recently announced Burkhead has a small tear in his knee which is a significant injury because of his history of knee issues. Last season Burkhead also dealt with knee injuries missing 6 games and this could a long term issue. While New England has downplayed the injury, owners should be concerned and cautious about rostering Burkhead).