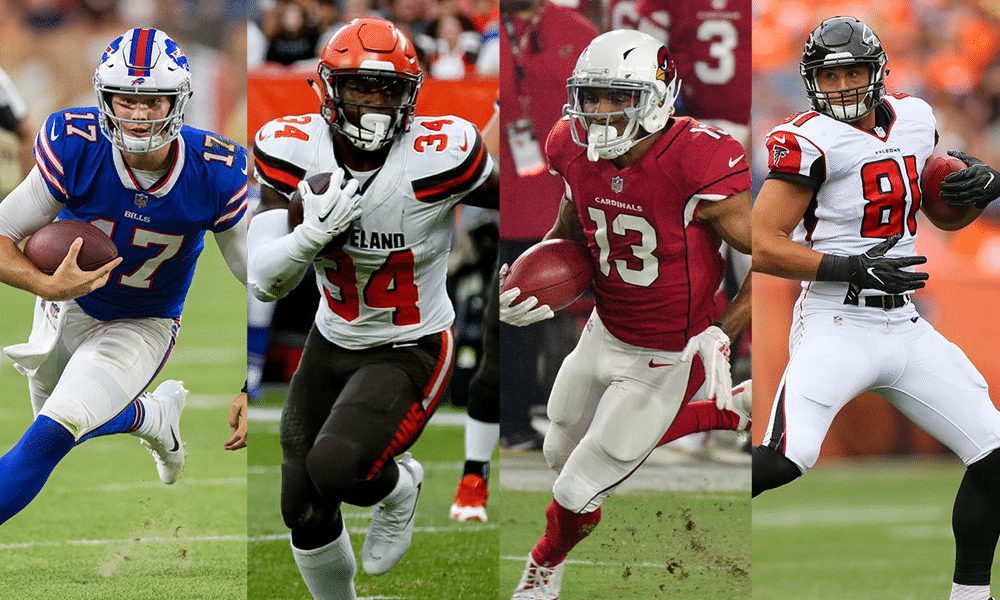 (Josh Allen will likely take over and has some decent options on offense in Lesean Mccoy, Kelvin Benjamin, newly acquired Corey Coleman and Charles Clay. Allen could be a decent streaming option in solid match ups with garbage time / volume based production).

Mahones was 8-for-12 passing for 138 yards adding 26 rushing yards with 1 TD / 1 INT in Friday’s preseason game versus the Falcons.

(Mahomes looked impressive and is surrounded by a ton of talent in a great system. With weapons like Tyreek Hill, Travis Kelce, Sammy Watkins and Kareem Hunt around him, Mahomes should put up strong numbers even if he throws a lot of interceptions)

(Last week Rosen completed 6-of-13 passes for 41 yards adding 8 yards rushing with 1 TD / 0 INT versus the Falcons He is having a solid preseason but will still likely sit behind Sam Bradford for the majority of this season).

Kirk had 4 receptions for 49 yards (12.3 AVG) with a TD in Friday’s preseason game versus the Saints.

(Last week Kirk had 2 receptions for 9 yards and a TD in Saturday’s preseason game versus the Chargers. Kirk is building a strong repor with fellow rookie QB Josh Rosen and has scored a touchdown in each preseason game. Kirk could have WR3/ FLEX value if he can supplant the numerous options ahead of him on the depth chart).

Hyde had 9 carries for 64 yards (7.1 AVG) adding 1 catch for -5 yards in Friday’s preseason game versus the Bills.

(Hyde looks like the browns choice for early down and goal line work with Duke Johnson working as a passing down receiving back and Nick Chubb functioning as a change of pace back).

Chubb had 11 carries for 53 yards (4.8 AVG) adding 2 catches for 0 yards in Friday’s preseason game versus the Bills.

(Chubb looks like a strong Dynasty option but this season his role seems limited with Carlos Hyde and Duke Johnson claiming larger roles in the offense).

Williams had 8 carries for 37 yards (4.6 AVG) adding 1 catch for -2 yards in Friday’s preseason game versus the Saints.

(Williams saw snap with the first team offense and will have some value until Mark Ingram returns from suspension. He is also worth stashing incase injuries open up playing time or Mark Ingram is traded like Adrian Peterson was early on during last season).

(Hooper has decent receiving skills and upside in a strong offensive system. He is a name to monitor incase injuries can open up more targets in a crowded offense).

(Charles Clay is injury prone and the Bills should be down in most games passing a ton with rookie Josh Allen at quarterback. In the event of an injury O’Leary could be a solid streamer or back end volume dependent TE option).

Stewart had 4 carries for -1 yards (1.03 AVG) in Friday’s preseason game versus the Lions.

(Stewart was already receiving negative reports out of camp and looks sluggish. Wayne Gallman had 5 carries for 26 yards adding 2 catches for 9 yards and a TD. Gallman could eventually eat enough into Stewarts touches and become the handcuff to own behind Barkley).