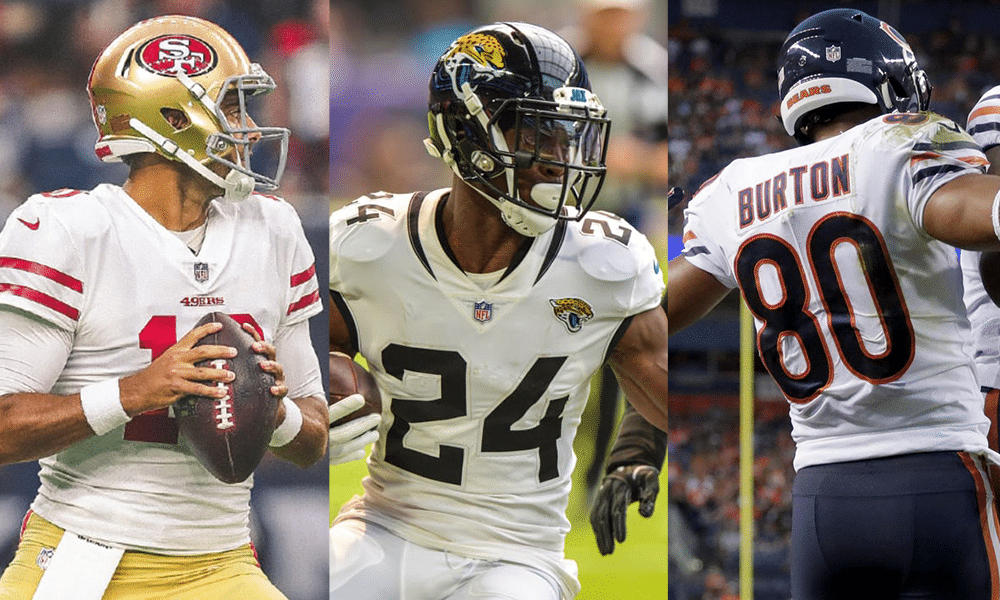 (Shaheen was having a strong camp and preseason and the injury looks serious. Trey Burton now should see even more snaps).

(Scarbrough was seeing extended run with Elliot sitting out and looked good. Rod Smith, however, is still the expected handcuff and this injury should cement that going forward).

(Garoppolo looks like a good fit in Kyle Shanahan’s offense and has some decent weapons in Pierre Garcon, Marquise Goodwin, George Kittle and Jerick McKinnon. Garoppolo’s ADP is beginning to get out of hand but he still a solid value for those waiting on QB).

(Trubisky looks like a possible break out in his second season under new HC Matt Nagy. Trubisky has significant talent around him in Allen Robinson, Taylor Gabriel, Trey Burton and pass-catching running back Tarik Cohen).

Brown had 2 receptions for 74 yards (37.0 AVG) in Saturday’s preseason game versus the Chargers.

(Brown has a chance to earn a larger role with Jimmy Graham’s departure to the Packers and Doug Baldwin sidelined. Brown is behind Brandon Marshall and Tyler Lockett on the depth chart but is a name to monitor in deeper leagues).

Taylor had 4 receptions for 95 yards (23.8 AVG) in Saturday’s preseason game versus the Buccaneers.

(Taylor has a lot of options to contend with for targets in Corey Davis, Rishard Matthews, Delanie Walker and pass catching RB Dion Lewis. Taylor will function as the slot receiver in a revamped Titans offense under new OC Matt LaFleur and could emerge as a deep league in option in PPR leagues).

Pettis had 2 receptions for 32 yards (16.0 AVG) in Saturday’s preseason game versus the Texans.

(Pettis has been having a strong offseason and has a chance to carve a larger role in the offense. However, Pettis is at best the 4th option behind Pierre Garcon, Marquise Goodwin, and George Kittle. Targets will be an issue making Pettis more of a name to monitor if injuries open up more targets).

Freeman had 6 carries for 20 yards (3.3 AVG) adding 1 catch for 6 yards with a TD in Saturday’s preseason game versus the Bears.

(Freeman continues to outperform perceived starter Devontae Booker and should see more reps with the first unit. Booker has unimpressed so far in his career and Freeman looks like a potential breakout RB2 candidate).

(Yeldon looks like the clear #2 in Jacksonville and the handcuff to own behind Leonard Fournette. Fournette has a long history of ankle issues going back to LSU and missed several games last season. Yeldon is a gifted receiving back and could have value in PPR leagues but remains one of the strongest handcuffs in fantasy).

Barber had 6 carries for 32 yards (5.3 AVG) adding 1 catch for 3 yards in Saturday’s preseason game versus the Titans.

(Barber has been talked up by the coaching staff as the lead back and Ronald Jones continues to struggle. Jones might be the more talented option with long-term upside but much like Chris Carson in Seattle Barber will be given the first chance as the lead back).

Burton caught 4 passes for 45 yards (11.3 AVG) with a 1 TD in Saturday’s preseason game versus the Broncos.

(Adam Shaheen suffered a potentially serious ankle injury securing Burton’s role as the clear #1 TE under new HC Matt Nagy. Burton has had limited action with the Eagles but has performed well when given an opportunity. With an increased workload in a high upside offense Burton has TE1 upside and is a solid value at his current ADP).

Gathers caught 2 passes for 32 yards (16.0 AVG) in Saturday’s preseason game versus the Bengals.

(With Dez Bryant and Jason Witten gone there are opportunities for targets in Dallas. Blake Jarwin and Geoff Swaim are also competing for the starting TE role in Dallas and this continues to be a position battle to monitor).

Green caught 2 passes for 25 yards (12.5 AVG) in Saturday’s preseason game versus the Seahawks.

(Green is the lone tight end option for the Chargers with Hunter Henry out for the season. The Chargers are likely to sign Antonio Gates but if that does not happen Green could be a solid streaming option with low-end TE1 upside).

Jones had 4 carries for 2 yards (0.5) in Saturday’s preseason game versus the Titans.

(Ronald Jones has struggled for most of the offseason and Peyton Barber is likely to start the season as the Buccaneers starting RB. Jones is still the more talented back and should claim the job into the season with RB2 upside).

Booker had 4 carries for 17 yards in Saturday’s preseason game versus the Bears.

(Booker has struggled in his opportunities as a starter and Royce Freeman has looked impressive during the preseason. Freeman is the back to own and Booker will likely function as the secondary option in Denver).