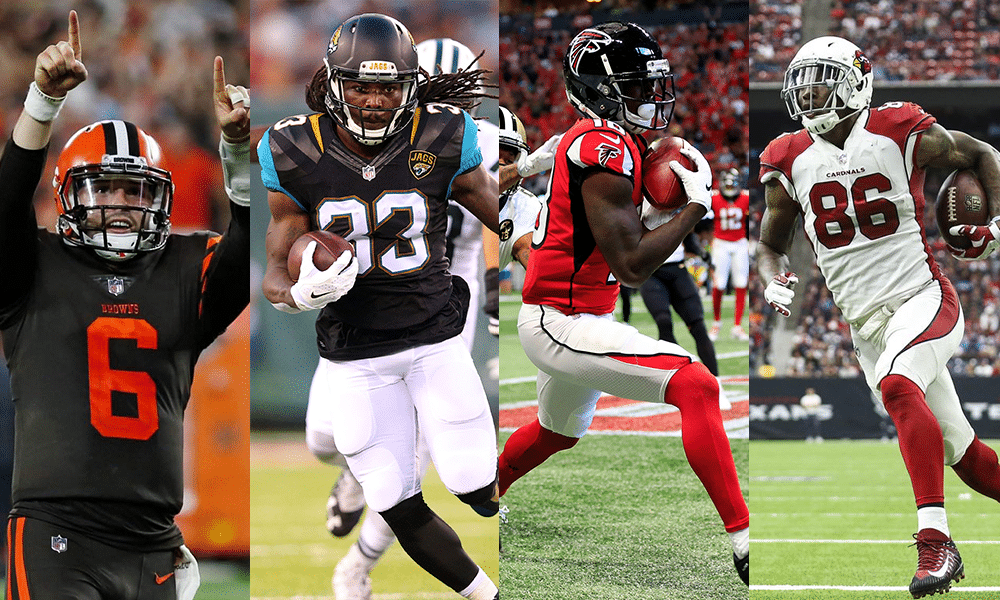 After Tyrod Taylor went down with a concussion in the first half, Mayfield took over and looked brilliant in a come from behind win. The Browns offense looked faster and more explosive with Mayfield under center and all Browns skill position players should see an uptick in value. Hue Jackson announced Monday Mayfield will continue to start and needs to be owned in Two QB Leagues/ Superflex and is worth streaming in standard leagues.

Allen and the Bills surprised in a blowout win versus the heavily favored Vikings winning 27-6. Allen was especially effective as a runner avoid pressure and functioning well in the red zone with two rushing scores. The Bills should be down most weeks and forced to pass making Allen a solid volume play when streaming.

With LeSean Mccoy out due to a rib injury, Ivory received a healthy 20 carries but struggled versus a strong Vikings run defense averaging 2.8 YPC. Ivory surprisingly excelled as a receiver turning 3 catches into 70 yards. With Mccoy dealing with a possible suspension on top of a rib injury, Ivory needs to be owned as strong handcuff. Ivory has high end FLEX – low end RB2 value based on volume and goal line work.

With Marlon Mack out due to foot and hamstring injuries, Jordan Wilkins and Hines once again split touches both failing to impress. Mack continues to deal with numerous injuries and Wilkins has struggled opening up an opportunity for Hines to carve out a larger role. Hines excels as a receiver and on a bad Colts team likely trailing in games he should see targets due to game script. While his upside is limited Hines offers solid FLEX in certain match ups in PPR  leagues.

After Jay Ajaye and Darren Sproles were both ruled most assumed Corey Clement would assume the role of lead back. While Clement did receive 19 touches to Smallwood’s 13, Clement only avg’d 3.6 YPC to Smallwood’s 5.6. The Eagles running back situation continues to be complicated and unpredictable but while Ajaye and Sproles are out Smallwood has FLEX appeal in PPR leagues.

Ridley and the Falcons dominated the Saints secondary blowing up for 37 points in an OT loss. A first round pick this season and considered the most talented receiver in this draft class, Ridley came into the year as a possible bench flier due to the crowded Falcons offense. However after three weeks it is clear Mohamed Sanu has taken a backseat to Ridley, making Ridley a solid FLEX / WR3 option with WR upside if given an expanded role.

A former 2nd round pick in 2016, Boyd has shown flashes of upside in the past but this looks to be his breakout season. With first round bust John Ross once again failing to impress and AJ Green banged up Boyd is seizing his opportunity for touches. Showing solid report with Andy Dalton who is an underrated fantasy QB, Boyd has solid FLEX – low end WR2 upside.

After missing most of the offseason and being healthy scratched for the first few games, Meredith is finally healthy and ready to ready to contribute. Although he is behind Michael Thomas and Ted Ginn, Meredith could carve out a role in the red zone given his size 6’3. Meredith showed upside with the bears un 2016 recording 66 catches for 888 YDs and 4 TD on a weak Bears offense. In a much stronger offensive system with one of the best QB in the league throwing to him in Drew Brees, Meredith is a solid bench stash with WR3 upside if he can earn a larger role in the offense.

Although he is at best the 4th option in a crowded offense Watson is still receiving a decent amount of targets. The Saints will be playing the Giants next week who are one of the worst defenses covering tight ends. Watson is a solid streaming option for those dealing with the loss of Evan Engram and a decent back end TE1.

Seals-Jones was a popular sleeper pick coming into the season, an undrafted rookie out of Texas A&M, Jones is an athletic freak at 6’5 with exceptional speed for his size. Jones finally broke out last week with a 35 yard TD against the Bears. Sam Bradford has been benched for Josh Rosen which can only be an upgrade given how putrid the Arizona offense looked under Bradford. Jones has immense upside and is a solid streaming option with TE1 potential.